There’s much to see and do in Western Kenya. One is bull fighting. Bull fighting in Western Kenya takes place among the Idakho people, which is a sub tribe of the larger Luhya community. It involves two bulls taking on each other, with thousands of spectators cheering on, and blowing traditional horns.

The bulls are prepared adequately for the occasion, having been fed adequately and prevented from mating heifers. Before the D-day, they are fed with traditional beer, and mixtures of other ingredients and substances, to provoke them. The owners also keep them under tight watch to avoid rivals from “casting evil spells”.

They are then led to the field to counter each other. The 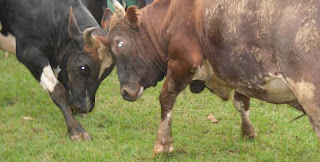 battle lasts from 4 to 30 minutes and the losing one flees. This poses danger to the on looking spectators as the run-away bull can heavily injure someone as it flees. The owner of the winning bull receives a cash price. Later on, celebrations are done with locals enjoying the local traditional brew.

Other spectacles to enjoy around Western Kenya include the Kakamega Forest Reserve, which is host to various species of butterflies, birds, monkeys, snakes and other reptiles.

There are also the crying Stones which were used by the community for religious ceremonies. The Lwanda Magere stone in Western Kenya is found along the Chemelil-Nandi Road. It is believed that the body of the legendary Luo warrior Lwanda Magere turned into a rock when a spear pierced his shadow during battle.

Such would be nice places to visit while on a family safari in Kenya. It would also give you some pleasure to enjoy a balloon ride in Kenya, probably to the Masai Mara, where you could watch lots of wildlife from a bird’s eye view, and even the spectacular Wildebeest migration.