Fierce predators roam in the Kenyan jungles and savannah searching for prey. Lovers of travel, nature and wildlife can catch these and more while on safari to some of Kenya’s National parks, which are among the best tourist destinations in Africa. Read more and get to know the techniques employed by some of the best hunters in the jungle.

Lions stalk their unsuspecting prey till they are within a reasonable distance to pounce because they are not as fast as other predators. They are also known to wait close to spots where preys frequently visit such at water holes. The savannah environment, which is composed of tall brown grasses help the lions to camouflage, aiding their hunting. However, lions are known not to factor in wind direction, and will approach prey even from the side the wind is blowing from, which is a major undoing. They breed in prides, made up of closely related females and their cubs and a maximum of 3 males. The females engage in most of the hunting and work as a team. 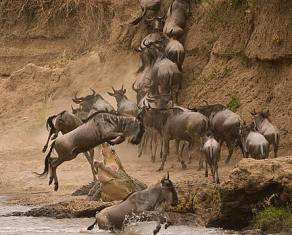 d hunters. They eat fish, birds and mammals. A crocodile lies close to the water surface and pounce on an unsuspecting prey that will usually have come to drink water. It grabs they victim’s neck, pull it into the water as it twists to drown it. Crocodiles bring down even animals as large as buffaloes and elephants. At times, they hunt in packs of about five where they kill prey as big as hippos or rhinoceros. In Kenya’s Masai Mara, crocodiles kill lots of wildebeests and zebras, especially as they cross the River Mara, during the annual wildebeest migration.

Cheetahs are the fastest animals on land. This primarily aids in their hunting as they catch animals that other hunters cannot. They are however sprinters and hence cannot run for long distances. They will therefore approach the prey stealthily, usually downwind. Cheetahs are disadvantaged by their small sized body. They are also very shy and cowardly. Wild dogs, hyenas or even lions that may have been watching the ensuing drama will snatch they kill, even before the cheetah catches its breath.

Leopards hunt by themselves usually at night. They are very solitary animals. Their diet mainly comprises monkeys and ungulates. They may also eat fish, rodents and amphibians. A Leopard stalks their prey stealthily and pounces when extremely close enough. It will then drag the kill to the top of a tree, where it feeds slowly, probably even more than a day. This makes it difficult for other predators to steal the kill or disturb it. 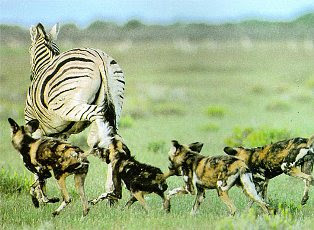 Wild dogs hunt in packs, which can be up to 20 members. They can reach a speed of 50km/hr. They mainly prey on antelopes but can bring down even zebras and wildebeests if the pack is bigger. They work as a team when hunting. Some dogs will chase close and directly while others will be on both sides running not very fast and will take over the direct chase when the prey starts for the direction they are in. They prey will tire soon and slow down, and present the chance for the pack to catch it.

Although known to scavenge on the remains of dead animals, hyenas also hunt on their own. Their hind legs are short and their hearts are bigger than even lions’, enabling them to be long distance runners. They will therefore chase a prey for a long distance, running at a moderate speed. The prey will eventually tire and hence get caught.

You can catch these predators while on holiday in Kenya, where there are also lots of other activities to engage in such as hot air balloon rides in Kenya, Mount Kenya climbing, among others.

Posted by Kamau Mbiyu at 2:15 AM No comments:

Kenya: Home to the most beautiful Birds

Welcome to Kenya, and find hundreds of bird species. They range from birds of prey to seed eaters to nut crackers to flightless birds and so much more. The birds, with all their glory, beauty and habits while in their natural setting, make Kenya a bird watcher’s paradise to those who are lovers of our feathered counterparts. The list below displays a just but a few of the many birds that Kenya offers. Next time you are on Kenya safari, have a keen eye on them. 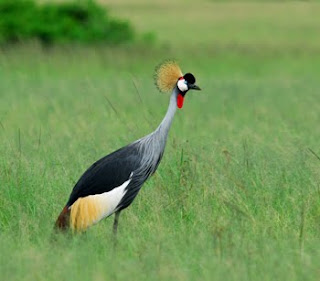 These are large, beautiful, terrestrial birds with long necks and legs, found in marshes and grasslands. They have short tails and some species have ornamental crests. The sexes pair and perform nuptial dances but they at times form large flocks. They maintain sustained flight with their heads and necks held below the hunch-backed appearance. They eat insects, small animals and seeds.

The hornbill’s main notable feature is the casqued beak. They have short legs, are usually black and white, with their bills and necks having bright colors. They have long eyelashes, relatively short wings but their tails are long. Their main diet comprises fruits and berries but insects could also fall in their menu. After mating, the female hornbill stays the nest that is built on a tree or cliff using mud, leaving a minute cavity whose purpose is for the male to feed her and the young ones for some weeks until they are capable of flying.

Crows have patches of grey, brown or white but they are mainly black. Their bills and feet are heavy and strong. They eat animal matter, seeds fruits and grains. They have broad wings and flap steadily while they are flying. Their nests are large and are made of sticks. Crows are unmistakably known for their loud raucous calls.

Woodpeckers tap on wood and bark of trees, searching for insects, and catch them with their sticky tongues. Their beaks are hard and shaped like a chisel. Their tail feathers are stiff and pointed and this provides support while they are on tree trunks. Still, support is boosted by sharp claws with which they cling on trunk. 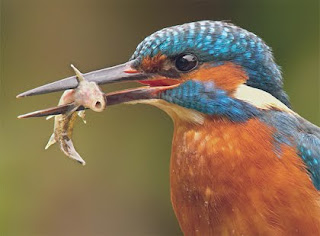 Range from small or medium sized species. They possess heavy and pointed bills. Their legs are short. They are mainly found near water bodies and fish constitutes their main diet. They are excellent divers and make for the kill with great speeds and expertise. There are however some species that inhabit places far from water bodies and they feed on insects.

Owls are large eyed nocturnal raptors. They prey very silently, but have distinctive hoots and remain highly vocal during times with full moon periods. Owls can turn their necks round to 180 degrees. The sexes are usually similar. They are mainly found in woodland and forest edges.

Parrots are bright and colorful and they have strong beaks for breaking nuts. Their legs are short and the first and fourth toes directly face backwards. They mostly have short tails and their flight is fast with shallow wing beats. They are very loud and noisy and nest in tree cavities. 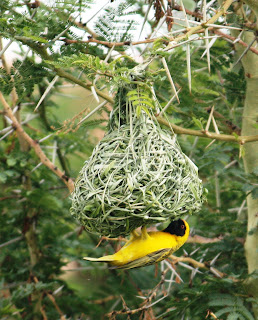 Weavers are small birds with short hard bills that are meant to feed on seeds. They range diversely in color and at times some species change seasonally. The species also have varying habitats and breeding habits. Some are solitary with others breeding colonially. All the same all construct distinctive nests.

You can catch all these birds and more in their natural settings while on a tour in Kenya. Those that inhabit woodlands and grasslands can be spotted in areas around national parks such as Masai Mara, Samburu, Amboseli, among others. Those that reside near water masses e.g. Kingfishers can be found in areas such as Lake Naivasha, Bogoria, Nakuru and so on. Other activities to do while on Safari in Kenya include Mount Kenya climbing, Hot air balloon rides, Masai Mara safari, beach holidays, and so much more.