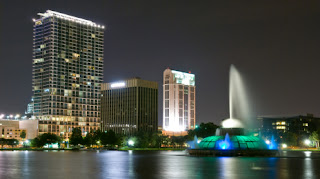 Orlando is a great escape in the cold winter months. Temperatures are mild and if you are Canadian like me, wearing flip-flops and a sundress is a real treat in December. One week just wasn’t enough time to experience all that this city had to offer. It seemed that we weren’t alone in our thinking because we met many people while we were there and very few of them were Orlando natives. People flocked from all over the country and beyond to sit in the sun or take the family to Disneyworld.

The best part of our trip to Orlando was a swim with the manatees. No, this is not found in Orlando, but a town about 1.5 hours away (by car) called Crystal Rivers. There are many tours that operate out of that area. We boarded a boat in the early hours of the morning and given a guided tour of the area. We actually got to touch several manatees in the wild. This was such a unique experience – how many people can say that they have swam with an endangered animal in the wild?

Another unforgettable experience was Discovery Cove. Situated right in Orlando, this place has something for everyone. We had trouble leaving the aviary because there was a bird sleeping on my head and we didn’t want to disturb her. I will not soon forget that. When we did venture out, we snorkeled with manta rays and tropical fish and even got to touch them. Even though it started raining, this didn’t ruin our day at Discovery Cove as we were well on our way down the lazy river. The water is heated so a little rain was not going to ruin our day.
We decided to forgo Disneyworld, SeaWorld and Universal Studios as we had just experienced them in San Diego a few months prior. Instead, we made the trek out to Tampa to visit Busch Gardens. My husband had a great time on the Cheetah Hunt though – despite waiting in line 90 minutes (apparently Christmas time is the busiest time at Busch). We took the sky ride and the train around the park and visited all of the animals. I especially liked being able to pat a kangaroo.

Most people probably don’t go to Orlando to shop but there is an amazing outlet mall there. Orlando Premium Outlets is a huge mall that has everything from Coach to Burberry to Tommy Hilfiger. The deals were to die for! We actually had to leave before we saw most of the mall because we spent all of our money within the first couple of stores.
One free exhibit is the duck march at one of the Orlando Hotels. It is very brief but very neat. The ducks march from their quarters down a red carpet and into a fountain. We stayed only a few minutes but it was quite a spectacle.

Last but not least our Orlando Hotel was amazing. The Caribe Royale had friendly staff and magnificent pools. We found all of the hotel information on Orlandoescape.com If you stay there, look out for the hidden pool behind tower 4 and 5. Most people don’t realize that it’s there and it is virtually unoccupied. One thing that this hotel does well is their gym. It has great equipment and it’s huge. Also, there is a kid’s movie playing every night outside. You sit poolside and watch a movie under the stars!

I will definitely be traveling to Florida again for a vacation. It was such a welcome break from our cold, dreary weather. We got a great rate on our airfare (we flew out of Seattle as opposed to Vancouver and saved $600) and the hotel. Next time I will avoid the busiest week and opt for mid-January when all of the kids are back in school.