Located in Central Kenya, the Aberdare Ranges span 160km in length and a maximum height of 3994m above sea level. They are one of the major and most fabulous natural tourist attractions. They are a natural habitat for diverse range of nature, hosting both flora and Fiona. They are on of the few remaining natural sanctuaries for indigenous trees such as the Mugumo, camphor, oak among, many others. There is also lots of wildlife. The ranges’ most significance is its capacity as an instrumental and integral water catchment area, providing water to the environs near and far from it. It is a source for many rivers, most of which flow into lakes far and wide and others into the Indian Ocean.

The lake Ol-borosat rests near its foot on the Western side. The lake is a magnificent site, full of life, courtesy of the thousands of birds and scores of hippos that have this for a home. There are also very many species of insects. However, its diameter varies from season to season, depending on the intensity of rain.

The ranges provide a breathtaking 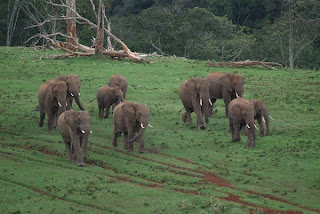 view even form the distance. One catches a whole glimpse of the spectacle, right from its foot, its sleep slopes which are covered in vegetation, to its mountain top that seems to touch the sky. On the North Western side, the vast Aberdare National park hosts a diverse range of wild animals, from the fierce carnivores to the meek gazelle. The Elephant is one of the Big Five that you are most likely to come across while here on your Kenya Safari. The park hosts an estimated 2000 of these huge beasts. One can view them very closely because they are used to tourist’s cars. Some more animals to find here include bongo, dikdik, waterbuck, warthog, bush pig and so much more. There are also very many species of birds.

The rivers in the ranges flow along quite a number of river falls and rapids. These features provide lovely picnic sites, because of their scenic views and the unforgettable roaring sound of splashing water as it hits the rocks at their feet. The slopes have rich growth of vegetation, including tall trees, bushes and undergrowth. The most n 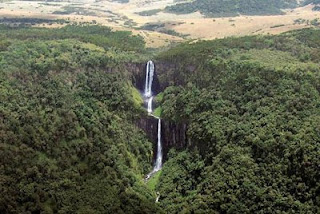 otable vegetation cover is the thick growth of the bamboo forests.

Anyone who likes mountain climbing will most definitely love this ranges. There are a number of peaks, the first being the peak of despair, buffalo, elephant and the highest being satima. While standing on these peaks, one is enjoys the beautiful view below, with one being able to spot a number of towns. One can start here while preparing for Mount Kenya climbing.

Several luxurious lodges host tourists who visit around, among them being TreeTops, Outspan and others. Treetops hosted Elizabeth II on the night she became Queen of the United Kingdom. Another legendary story related to the Aberdare ranges is that of the Rogue elephant of the Aberdare. The bull elephant attacked villages and terrorized humans and did not to attack a village more than once, making it very difficult to know its movements. It was however killed later on by J.A. Hunter.