The OluMara Camp is a luxury tented camp in Kenya that is located in one of the conservancies that border the Masai Mara National Park. The term OluMara was coined from the words Oluaru and Mara. The term Oluaru is Masai for a place that is known to be inhabited by leopards. The area around which the camp is built was known to be frequented by leopards. The camp is surrounded 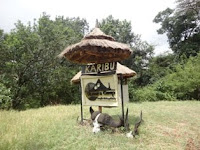 by a river, which acts as a barrier and prevents wild animals from nearing the tents.

A sign that welcomes one to the camp is wooden, and has a small round top made of thatched grass acting as a roof. On its foot, there are three huge animal skulls. Two are buffalo skulls while the other is an antelope’s. When entering the camp’s compound, one crosses a river through a rope suspension bridge. It is so awesome crossing the bridge, as it sways from left to right. All these bring the thrilling feeling of a real safari in Kenya.

Upon arrival, one is met by most welcoming members of staff, who will eagerly be waiting with glasses of cool juice, to relieve you from the heat of the long drive. Guests are then led to a comfortable lounge. The furniture in the lounge such as tables is extracted from large chunks of wood or logs, with the natural shape maintained. They are however smoothly polished. The sofas are luxurious and comfortable. 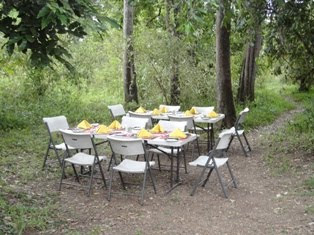 Most guests will usually arrive just in time for lunch. The camp organizes bush lunches and dinners. The table is set a few meters away from the main dining room. The meals are sumptuous and comprise a full buffet course. There’s nothing more thrilling than the experience of having lunch in the open bush, accompanied by the chirping of birds in the trees and the cool air provided by the shade from the trees and the cool breeze. The perfect getaway from the norm in the civilized cities.

The compound in the camp is green with well mowed grass. The tents are 11 in total. They are named after animals and birds. The camps are big enough and usually accommodate 3 beds, one of which will usua 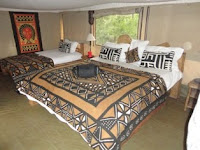 lly be a double bed. The beds are very comfortable and have very soft duvets. There is a lamp stand next to each bed. There is a verandah with a table and chairs, facing the open fields where one can enjoy a cool time. They are self contained and the washrooms are clean.

The dining area is big enough and also has a bar. During dinner, Masai men entertain the guests with traditional Masai songs and dances. At night, the lounge is lit by numerous lantern lamps. There is a fireplace between the lounge and the dining room, where guests can sit around a fire under the star lit sky. 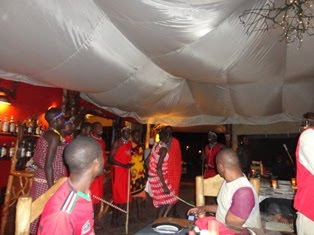 There is a wake up call at 6am for tourists to take an early game drive, just before breakfast. It is best to watch the animals in the mornings just before they retire to their hiding places, or late in the afternoons when they start emerging. Next time you plan to visit the Mara, Olumara camp would be a fine place to consider.