Palace on Wheels: A roving extravaganza into the heart of Rajasthan

Witness the synthesis of unique art, colorful culture, royal lifestyle, astonishing architecture and impeccable hospitality aboard the pioneer of luxury train traveling in India – the Palace on Wheels. This Indian luxury train, which started rolling in 1982, is equipped with the most exceptional amenities and takes you across the vibrant state of Rajasthan along with the home to the world Wonder Taj Mahal. Come explore India’s most frequented tourist destinations, rich culinary delights, royal hospitality, age-old forts & palaces, and irresistible wildlife in pristine habitats all on board Palace on Wheels.

The luxury train, operated by Rajasthan Tourism Development Corporation (RTDC), lets you discover the hidden facts and the enchanting beauty of the desert state of Rajasthan during its week long voyage amidst sheer luxury and opulence.

The carriages of this wonderful luxury train have a history to narrate of their own. Originally used by the rulers of princely states of Rajputana, Gujarat, the Nizams of Hyderabad and the Viceroy of British India, the magnificent coaches make you feel like an erstwhile Maharaja or a Nawab. After the independence of India in 1947, Indian Railways decided to discontinue the use of these magnificent coaches. Due to the coaches having finely decorated interiors with magnificent furnishing, it wasn't viable to have them used as normal passenger trains. In 1981-82, RTDC and Indian Railways decided to launch a special heritage train for tourists, covering Rajasthan. The journey was started to provide an extravagant, an unforgettable and a momentous tour experience to the tourists. And so that was how and why the Palace on Wheels came to life! 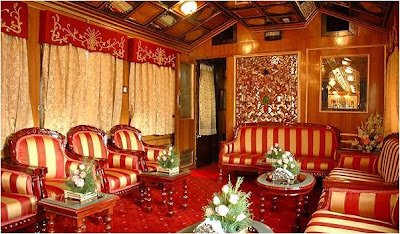 Departing every Wednesday from Safdarjung Railway Station in Delhi, the Palace on Wheels takes you to a vibrating journey to the royal land of sand dunes and regal palaces. It makes you visit the majestic expanse where Royal Rajputs lived in a grand style. It lets you explore this imperial land that carries with it an intrinsic ambience that goes perfectly well with the majestic charm and beauty spread so lavishly here and there in Rajasthan. The journey lets you spend a fabulous week in India and bask the immortal grandeur of Taj, the mystical sand dunes of Jaisalmer, the romanticism of Udaipur, the historical magnificence of Jaipur, the adventure of Ranthambore, and the never dying charm of the country capital Delhi. The train runs from September to April every season for it is the best time to visit the otherwise hot Rajasthan. Festivals are at their peak and the winter season with its romantic charm makes the journey all the more colourful, vibrant and unforgettable.
Posted by Kamau Mbiyu at 2:13 AM